Before I brought the kids home I was reading all kinds of stuff trying to bolster my confidence that this 'thing' was even possible: this home education.  Bah!  My conviction to homeschool was entirely non-negotiable.  It came from Jeremiah 10:2.   I had tried to avoid it for several years and in many varied ways: mostly running to Nineveh only to be swallowed by a great fish.  So Molech was Molech and we brought them home.  The book I return to the most from that time of questioning, is the one below.  Available at the OPL.

Gatto is probably the opposite of me.  He would be considered an unschooler, or at least a delight-directed learner.  He is heavy on literature and he believes in the inherent goodness of kids.  (Ya, right.) BUT, he challenged and changed all my ideas about education.  He is a proponent of family education and other apprentice type learning models.   Gatto loathed the sit-down school model, particularly for boys.  Before he won the New York State teacher of the year award, and then many times after, he was put on probation for allowing most of his class to "work from where-ever." Home.  The Police station.  The Dump.  There was never more than a third of the class, in class, at once.  He wanted his students with adults, one on one, as much as possible, so they would learn from them and learn to be like the people they wanted to become.

I was at the library yesterday and there were two little kids, maybe 8 and 10, both with phones, both doing something, perhaps 'educational' on them.  One of them bumped into a stack of books while walking and looking down.  The mom smiled and said they fight in the car if they aren't occupied.  The mom got books, checked them out, grabbed the kids' coats and told them several times she was leaving before herding them out the door.  She was really friendly and we talked about how annoying it was to track down everybody's winter things all around the country.

I had just finished reading Sarah Noble with Esther.  It's a story about an 8 year old who accompanies her father into unsettled territory to build the family homestead before bringing the rest of his young family to live.  She cooked for him and helped him mend his clothes and tools.  It is a story based on the first settlement in New Milford and Sarah is based on a real girl of the same name.  I thought about how little we ask of our kids.  We don't bring them out to New Milford because they might get bored or annoyed.   They don't become like their mother or father because they are becoming Facebook.

One of Gatto's main ideas for education reform was that kids must be allow to do stuff.  My dad was really good at this.  He let me do all kinds of stuff.  I think my sister and I were better prepared for adult life because we'd been given opportunity to screw things up on a small scale.

And now with my own kids, I look at all the workbooks I've accumulated and the tests we've filed away, they are miles and miles behind what I would consider my kids' real education: seriously dangerous farm work with really big cows, smashing hot iron with hammers with a local farrier, winning (and losing) robotics contests.  The boys' work with robotics was almost entirely self-driven.  They had to navigate programming, technical requirements and physical parameters for their design almost entirely on their own (I have a husband who is a lot like my my dad in his views on excessive-parental-involvement).  I think that our ideas about a safe and controlled childhood have allowed children to stay kids, into their late 40s.  I realize helmets and car seats are good examples of the progression of safety over time, but I fear that we've extended helmet-ish ideas to all avenues of life.  I can think of lots of examples, but they are all a bit offensive.  And that's part of the problem, we don't even like talking about consequences.

So it's a book worth reading.  You might even let your kids do some stupid stuff after. 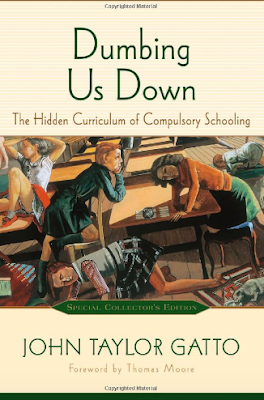