Swept up in the crowd... A mom post about politics

November 13, 2015
For someone who voted conservative and had (and still have) LOTS of pretty discordant things to say about the Liberal campaign.... Oh my goodness, Mrs. Trudeau is pretty lovely!  The hat?  Ya, I really love the hat!!

After being almost squashed to death by a herd of teenagers at the war memorial, who were trying to get a glimpse of Trudeau, here is a picture of my dad talking to Mdme Sophie, as she will henceforth be called in this house.

I feel a bit like the Tragically Hip song... "Yeah, I can get behind anything"

It's hard to keep your convictions while in the onslaught of Trudeaumania.  I had meant to ask Trudeau, "What about income splitting?  What about the value of the family unit as a working institution? Tax relief for small businesses?  What about gender-selection laws for unborn girls?" 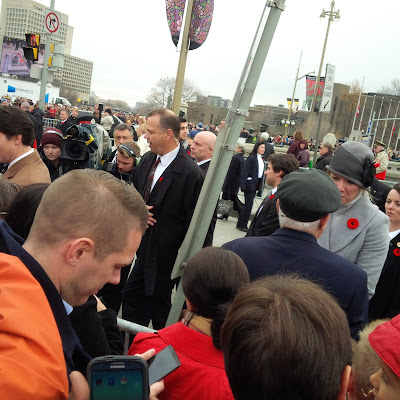